Classification of Low Back Pain based on Neuropathic, Nociceptive, or Central Sensitization dominance

Home Classification of Low Back Pain based on Neuropathic, Nociceptive, or Central Sensitization dominance

Classification of Low Back Pain based on Neuropathic, Nociceptive, or Central Sensitization dominance

Low back pain (LBP) is a heterogeneous disorder including patients with dominant nociceptive (e.g., myofascial LBP), neuropathic (e.g., lumbar radiculopathy), and central sensitization pain [1]. Nociceptive pain is defined as “pain arising from actual or threatening damage to non-neural tissue and is due to the activation of nociceptors, or as pain attributable to the activation of the peripheral receptive terminals of primary afferent neurons in response to noxious chemical, mechanical, or thermal stimuli” [1].The term nociceptive pain can be used when pain is proportional to nociceptive input, and it was designed to contrast with neuropathic pain [1]. Neuropathic pain is defined as ‘‘pain initiated or caused by a primary lesion, dysfunction, or transitory perturbation of the peripheral or central nervous system’’ [2]. There should be a clear history of lesion to nervous system either CNS or PNS resulting neuropathic pain [1]. Also, there is a major role of Central sensitization (CS) in individuals with LBP by which pain experiences are amplified [1]. CS is defined as “an amplification of neural signaling within the central nervous system that elicits pain hypersensitivity, is a real phenomenon or not, and can assess its relative contribution to inflammatory, neuropathic and dysfunctional pain disorders in patients” [3]. Both nociceptive and neuropathic pain can be classified as “specific LBP” when there is a clear patho-anatomical diagnosis [1]. However, a precise patho-anatomical diagnosis cannot be given in approximately 85% of LBP when the LBP is termed as non-specific LBP [1]. So, to recommend the different treatment protocol for physiotherapist and to improve the outcome we can classify LBP according to guideline proposed by Nijs and colleagues [1]. The classification can be done by following the following steps: Step 1: Rule out neuropathic pain with nociceptive pain by using the screening criteria for neuropathic pain in LBP patients which includes the following questions [2, 4]: • Is there a history of a lesion or disease of the nervous system, either central or peripheral nervous system? • If co-morbidities are present, are they related to neuropathic pain (e.g., cancer, stroke, diabetes, herpes zoster, or neurodegenerative disease)? • Is the pain distribution neuro-anatomically logical? • Is the pain described as burning, shooting, or pricking? • Is the location of the sensory dysfunction neuro-anatomically logical? Step 2: Algorithm proposed by Nijs et al can be used to differentiate and diagnose LBP whether it is Nociceptive or Central sensitization [1, 5]. There are 3 criteria in this algorithm: 1. LBP experience disproportionate to the nature and extent of injury or pathology. 2. Diffuse pain distribution, allodynia, and hyperalgesia. 3. Hypersensitivity of senses unrelated to the musculoskeletal system. 1st Criterion: LBP experience disproportionate to the nature and extent of injury or pathology Proportionate mechanical /anatomical factors which is clear to aggravating factor of pain is more suggestive of nociceptive pain whereas disproportionate, inconsistent, non-mechanical/ non-anatomical pattern of pain provocation in response to movement/ mechanical testing is suggestive of ‘Central Pain’. MRI, X-Rays, CT scan and physical examination help us to diagnose anatomical factors of pain which helps us to identify nociceptive pain against CS. Also, dysfunction of lower back and pelvic joints need to be identified along with muscle tension or myofacial trigger points in lumbopelvic muscles and problems of intervertebral discs, bone, ligaments and joint capsules. 2nd criterion: Neuro-anatomically illogical pain pattern [5] If neuropathic LBP is excluded from the first step and the pain pattern is not logically neuroanatomical i.e criterion 1 and 2 are both met then we can consider the LBP has predominant contribution of CS. The patient can be asked to draw their pain pattern in body chart (pain diagram) and, if the pain pattern is not according to the pathology or anatomically logical or diffused kind of pain then criterion 2 is met. If neuropathic LBP is excluded, and only the first criterion but not the second criterion is met, further screening of criterion 3 is required. 3rd criterion: Hypersensitivity of senses Unrelated to the Musculoskeletal System [5] For this step Central Sensitization Inventory (CSI) is used which has high test retest reliability and internal consistency (Pearson’s r = 0.817; Cronbach’s alpha = 0.879) and good sensitivity (81%) and specificity (79%), which asses symptoms common to CS. The total score ranges from 0 to 100. The cutoff of 40 or more indicates presence of CS in over 82% individuals with pain. [caption id="attachment_418" align="aligncenter" width="873"] 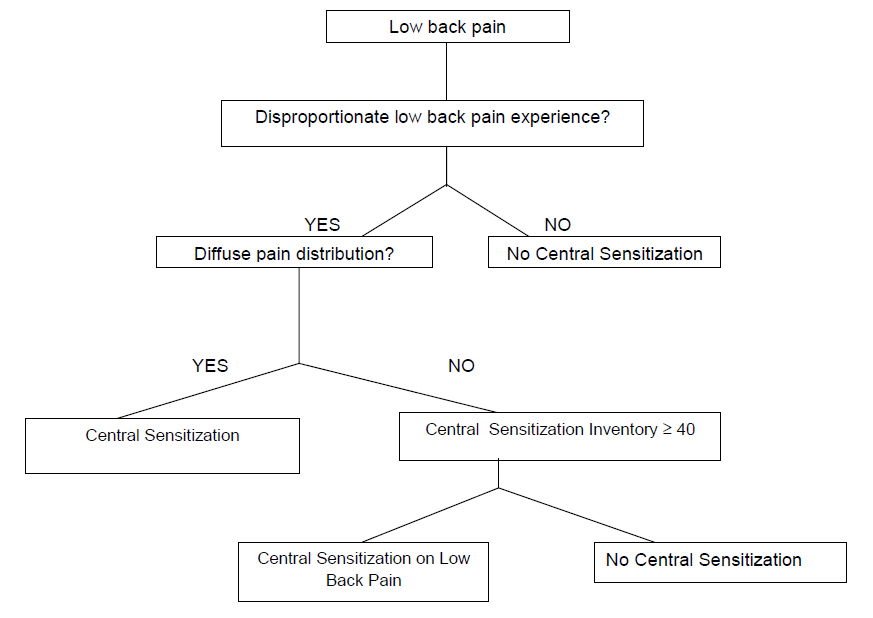